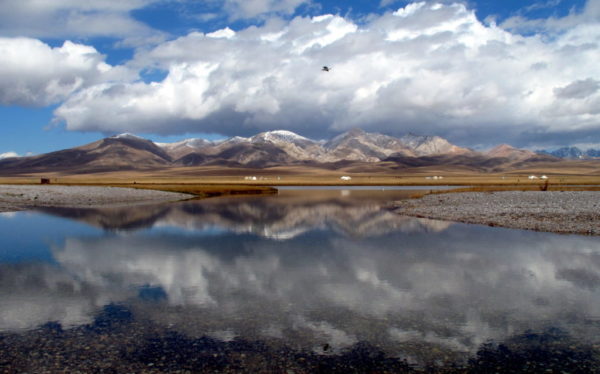 Son-Kul is a large alpine lake, sandwiched in a hollow between the internal spurs of Tien Shan.Located between the ridges of Son-Kul-Too and Moldo-Too, at an altitude of 3016 above sealevel in the north-western part of the Naryn region (Kyrgyzstan).

Son-Kul is a large alpine lake, sandwiched in a hollow between the internal spurs of Tien Shan.
Located between the ridges of Son-Kul-Too and Moldo-Too, at an altitude of 3016 above sea
level in the north-western part of the Naryn region (Kyrgyzstan). It is a potential object of
ecological tourism. Around the lake are virgin pastures and a conservation area. The nearest
large settlement is Gull village.
The total area of ​​the mirror is 278 km², the volume of fresh water is 2.4 km³, and the width is
18 km. The average depth is 8.6 m, the maximum depth is about 14 m. The basin of the lake is
of tectonic origin. The shores of the lake are low, the coastline is poorly indented, swampy, in
places overgrown with reeds. The lake is fed by small streams and small rivers with glacier
feeding, one Son-Kul river flows out — flowing into the right into the Naryn river. Ice on the lake
is observed from late September to late May.
The eastern part of the lake is part of the Karatal-Zhapyryk State Reserve. The lake inhabit 10
species of fish such as whitefish (Coregonus lavaretus Linnaeus, 1758), whitefish (Coregonus
nasus Pallas, 1776), peled (Coregonus peled Gmelin, 1789), Picea marinka (Schizothorax
intermedius McClelland &amp; Griffith, 1842), osman ( Diptychus dybowskii Kessler, 1874), rarely
flaked Ottoman (Diptychus gymnogaster Kessler, 1879), scaly Ottoman (Diptychus maculatus
Steindachner, 1866), Osman Severtsov (Diptychus sewerzowi Kessler, 1872), gray degraving,
degraded osman Severtsov, degraded ottoman (1872), degraded osman (Diptychus maculatus
Steindachner, 1866); Noemacheilus stoliczkai Steindachner, 1866).
According to various estimates, from 41 to 69 bird species inhabit the lake. It was also noted 52
species of near-water birds. The lake is an important point for the migration of waterfowl, such
as the demoiselle crane, mountain goose, black stork and black-headed giggle.