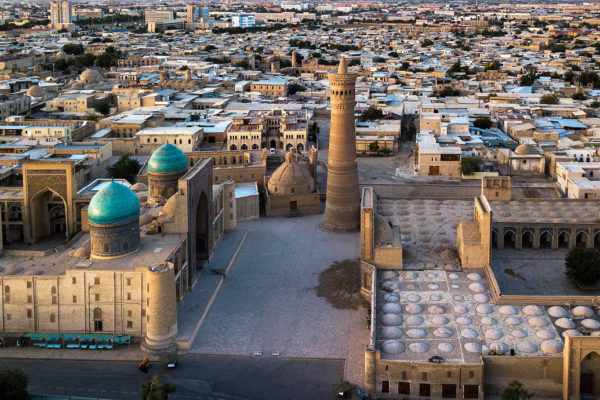 Uzbekistan is an amazing colorful country, teeming with ancient architecture and monuments, marvelous landscapes and hospitality. It will take months to visit all of the attractions. AsiaExpeditions offers you 3 chic days, 3 ancient cities and a rich entertainment program.

Uzbekistan is an amazing colorful country, teeming with ancient architecture and monuments, marvelous landscapes and hospitality. It will take months to visit all of the attractions. AsiaExpeditions offers you 3 chic days, 3 ancient cities and a rich entertainment program.

Tashkent is the capital and historical, cultural and political center of Uzbekistan. It is the most visited by tourists. Throughout its history, the «stone city» has experienced many shocks. But this did not affect his beauty and hospitality of the inhabitants.

Samarkand is the most beautiful and ancient city of Uzbekistan, which is the same age as Rome. Today he is 2750 years old. In the historical past, it was a key point between Europe and China on the Great Silk Road. Residents of the city carefully preserve the architectural monuments of that time. Bukhara is a city shrouded in many legends and traditions. For a long time he was the focus of high culture and science of Central Asia. Outstanding personalities of different eras lived here, made scientific and creative discoveries. You can learn more about all this and touch on the unique ancient artifacts in our tour to Uzbekistan.

Transfer to the hotel.

Exchange of dollars for soums.

Breakfast (not included in the price of the tour).

Start the tour with a professional guide.

Dinner on your own.

Overnight in Tashkent in a 3 * hotel.

Day 3: Tashkent-Samarkand (310 km)
Breakfast in the hotel.
Early in the morning transfer to Samarkand by bus.

Attendance:
1. Guri Emir Mausoleum — the mausoleum of Tamerlane (Amir Timur) and his family (Timurids) in Samarkand, one of the best examples of medieval architecture of the East.
2. Registan Square, a magnificent architectural ensemble, which has been the heart of Samarkand since the 15th century.
3. Observatory of Ulugbek
4. Mausoleum of Shahi Zinda, which is a medieval street consisting of mosques and mausoleums. This place is rightly called the museum of architectural decor of the 14th-15th centuries, there are irrigated carved terracotta, painted majolica, elegant patterns of mosaic tiles, and large mosaics of irrigated bricks.

Dinner at a local restaurant.
Overnight at the hotel 3 *.

Breakfast in the hotel.

Attendance:
1. Mausoleum of the Samanids (9-10 cc.)
2. Chashma Ayub Mausoleum (12,14,16 century) — inside is the source of the holy water of the biblical prophet Job.
3. The Bolo-House complex (18th century).
4. The Ark fortress is a majestic citadel, the dwelling place of the rulers of Bukhara, a bulwark of power and might (1st century BC — 19th century).
5. Madrasa Ulugbek (1417)
6. Madrasah Abdullaziz Khan (1652)
7. Ensemble Poi-Kalon (12.16 century)
8. Madrasah Mir-i-Arab (1530-1536). Here Kadyrov Akhmat-Khadzhi and the head of Russian Muslims Ravil Gaynuddin studied.
9. Kalyan Minaret is a symbol of Bukhara, for centuries, served as a beacon for desert caravans, approaching Bukhara.
10. Kalyan Mosque (16th century) — one of the largest mosques in Central Asia.

Lunch and dinner during the day at a local restaurant.

Overnight in Bukhara in a 3 * hotel.

Breakfast in the hotel

Cost includes:
* Accommodation in hotels in a double room (twin or double) 3 nights
* All transfers and transportation program
* Professional local guides services by city
* Meals: 3 breakfasts, 3 lunches, 2 dinners
* Entrance tickets to the attractions of the program
* Train ticket for the high-speed train Bukhara-Tashkent
* Accompanying tour leader throughout the tour

Cost does not include:

*Nutrition:
on the Bishkek-Tashkent road and back Tashkent-Bishkek.
* breakfast and dinner in Tashkent (you will need a total of about $ 12).
* surcharge for single occupancy
* photo and video when visiting sights
* personal expenses
* tips to guides in Uzbekistan (for the whole tour per person $ 4)